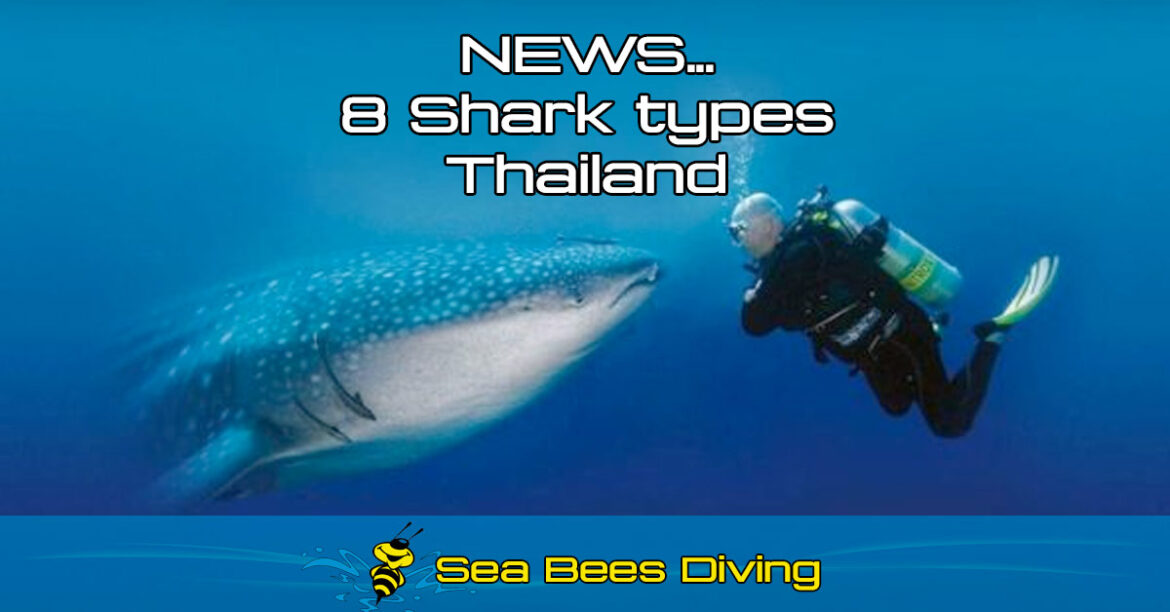 Not many animals are both loved and feared as much as sharks. We divers love sharks and cherish our encounters with them, while most of the (as yet) non-diving community live with a phobia of these creatures.

In this article we will list the varieties of shark in Thailand that divers are likely to come across, but it is not just an article for divers.

It is also for you, our non-diving friends, so that we may demystify and hopefully take away some of your fears concerning sharks. Swimmers and snorkelers, you too can learn to love these animals and come to realise that there is nothing to fear

So, what kinds of shark are there in Thailand?

First, a little background. There are around 440 different species of sharks worldwide. Sharks live in all seas around the world and are found both near the coast and in the open water. There are also shark species that live in the shallow waters and others that reside in the deep ocean. In Thailand, 14 different species of shark have been identified.

These includes the following 8 species, most of which scuba divers encounter more or less regularly.

8 shark species you can see while diving in Thailand

The following 7 shark species are those which we regularly encounter at dive sites in Thailand. Sharks can be seen at almost all the sites frequented by Sea Bees Diving. Some spots are more suitable than others, so here we list not only the shark species, but also indications on when and where you can see them best.

Leopard sharks are among the most common sharks that divers experience around Phuket, the Phi Phi Islands and the Similan Islands. This species, which we commonly refer to as Leopard shark, is officially called Zebra shark, the name inspired by its colorings as a juvenile. Zebra (or Leopard sharks) are up to 2.5 metres in length and live in depths of 5 to 30 metres, occasionally deeper.

They spend most of the day resting on sand or gravel surfaces. At daytime, you will only tend to see them swimming if they have been frightened by another dive group and are moving to a new place.

Leopard sharks are active at dawn and during nighttime, feeding on mussels, crabs, shrimps and snails. They are completely harmless to humans and very popular with divers as they can be carefully approached and observed from a close distance. Best places to dive with leopard sharks are, among others, Shark Point, Phi Phi Island and Koh Haa 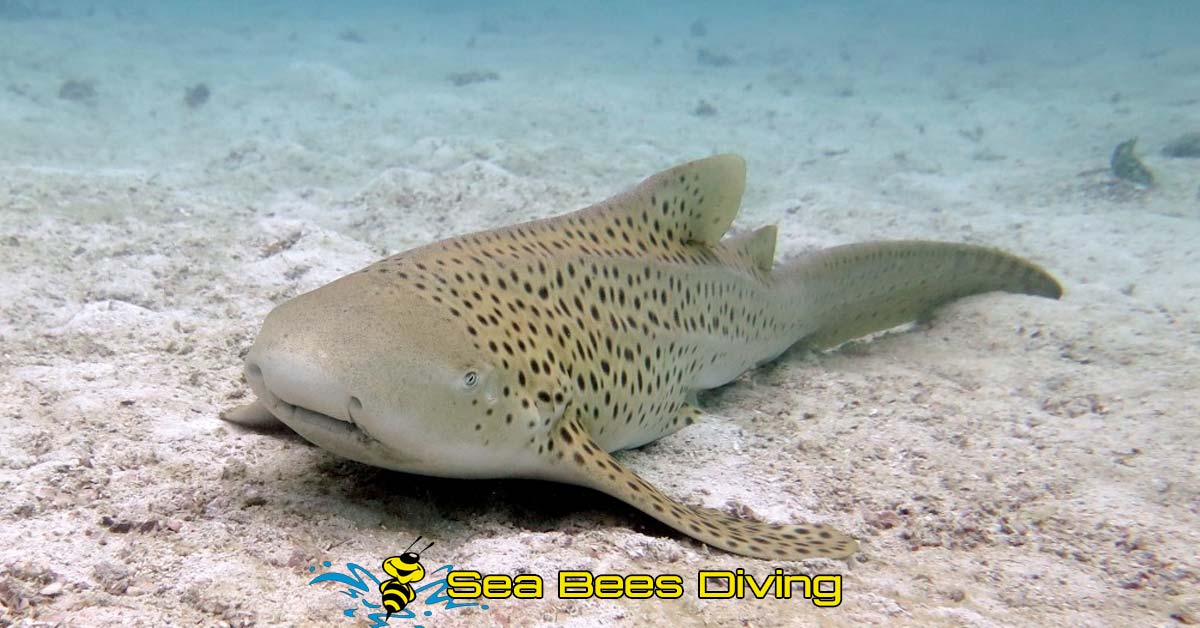 While Leopard sharks do not fit the classical idea of what ​​a shark is “supposed” to look like, the Blacktip reef shark does. With their sleek, slender form and greyish color, they are precisely what most of us imagine when we think of sharks.

They are named for the black-colored tips on their dorsal and pectoral fins. Blacktip reef sharks grow 1.6 – 2 metres long and are mainly found in coastal areas up to a maximum depth of 60 metres. Because they also like being in shallower waters, the Blacktip is one of the shark species that even snorkelers will often get to see.

Their diet consists of fish and invertebrate animals, but they will also hunt smaller sharks and rays. They are completely harmless to humans. Blacktips are very interesting for divers because they are often found in small groups and are not very shy.

They are happy to swim circles around divers and view them from a safe distance. Best places to dive with Blacktip reef sharks are at the Phi Phi Islands and the Similans. 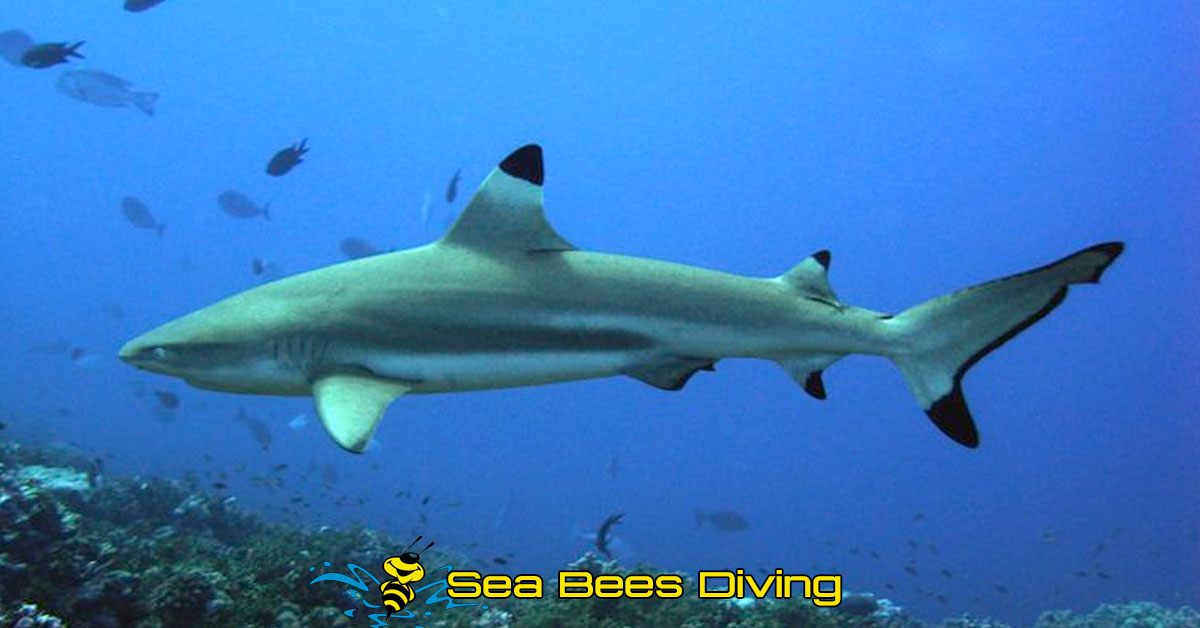 This is a shark which is small in size and is anything but terrifying. They have a body length of 80 centimetres maximum. These little sharks, who usually gather in groups under corals or in small columns are actually very cute

Because of their similar appearance, they are sometimes confused with their much larger cousins, the Nurse sharks. Although they are not uncommon, they are best spotted with the use of a lamp as they are often found hiding under corals, in car tires and the like.

But they are pretty much everywhere. 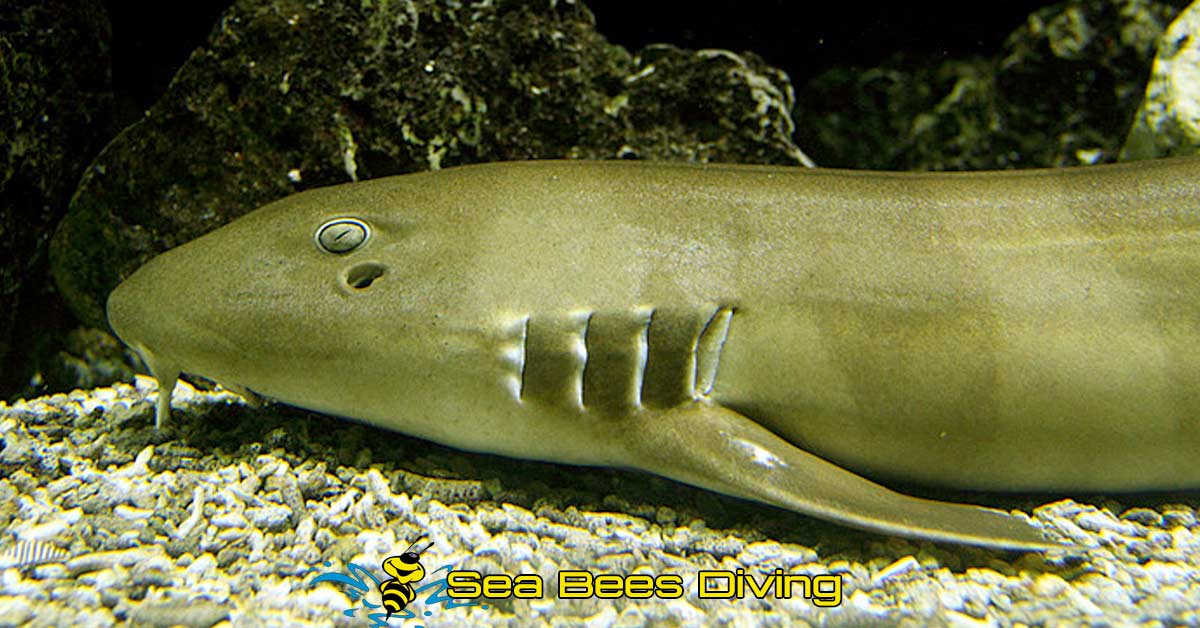 Let’s go from the smallest shark to the largest one. Largest not only in Thailand but in all of the world. Whale sharks are the biggest sharks on the planet with lengths of over 12 meters.

And they are at the top of the wish list for many divers. Whale sharks are huge, and completely harmless to humans. These gentle giants feed exclusively on plankton and not on other fish.

For divers and snorkelers, they do not pose any danger. In fact, they are very friendly and even want to be close to us. In Thailand, the chances of diving with whale sharks is not bad.

The best places for Whale sharks in Thailand are Koh Tachai and the Richelieu Rock, which can best be reached on diving safaris to the Similans, which depart from our diving base in Pak Meng, as well as in the south at Koh Haa, Hin Daeng and Hin Muang. 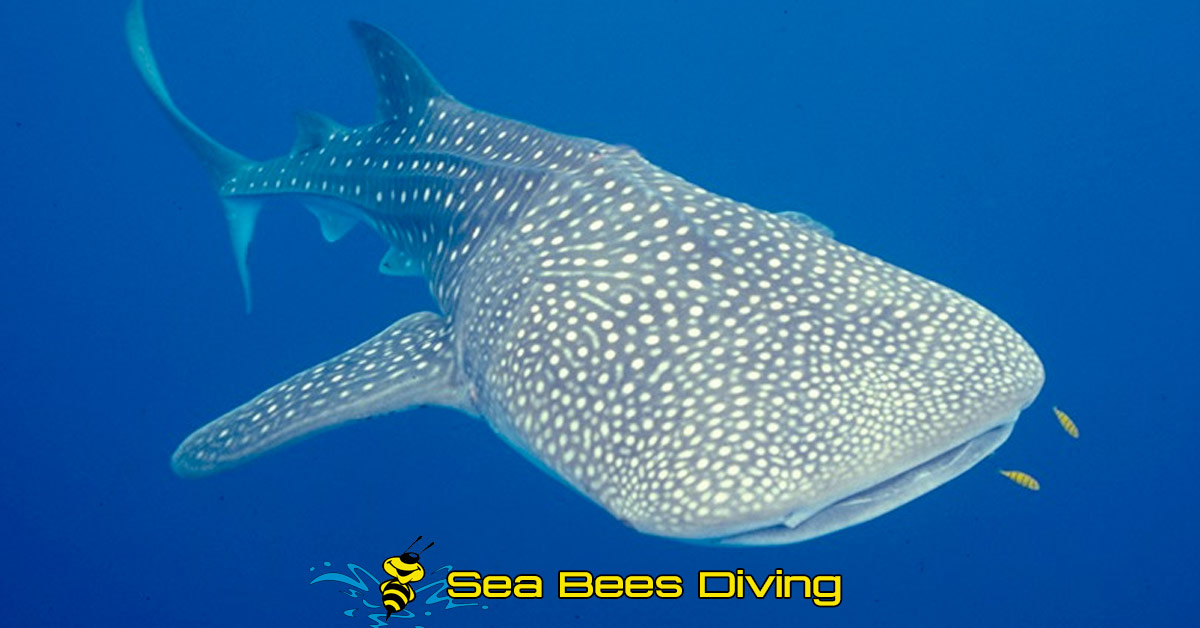 They are nocturnal and hunt in small packs for crabs, cephalopods and small fish. Whitetip reef sharks are around 2 meters long and live in coastal waters of up to 40 meters deep. They also are harmless to humans.

They are an ideal shark for divers to encounter because they are approachable and not so easily spooked. Best places to see Whitetip reef sharks are at the slightly deeper dive sites of the Similan Islands. 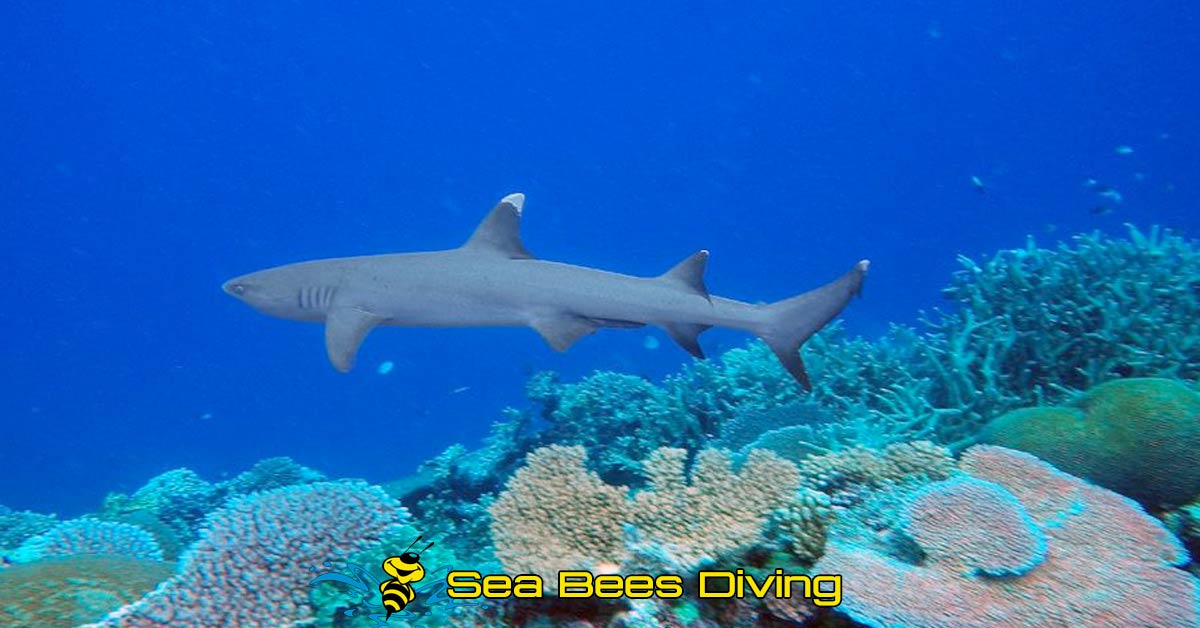 Another shark species with the classic shark silhouette and characteristics is the Gray Reef shark. They grow to up to 2 meters in length and live in depths from 0 to about 300 meters. They feed on smaller fish, squid and crabs.

They too are harmless to humans.

Opportunities for sightings are at the lower dive sites of the Similans, such as Christmas Point, Deep Six or Elephant Head, which are also visited during day trips to the Similans. 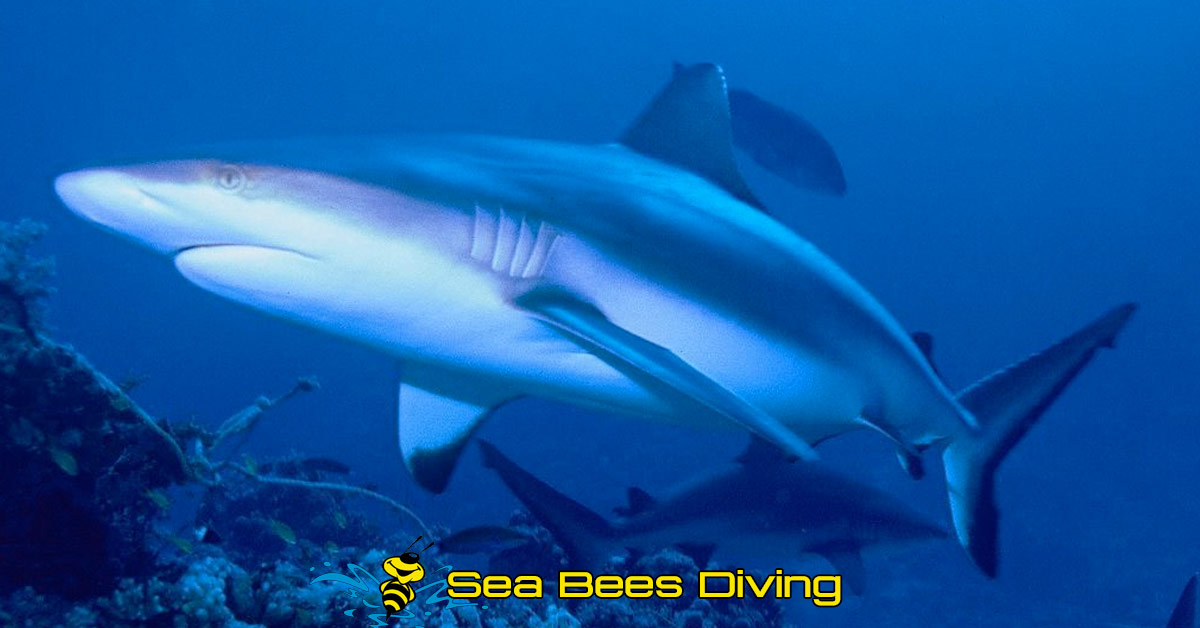 You have already been introduced to its smaller cousin, the Bamboo shark. Now meet the real Nurse shark. The species of Nurse shark which is found in Thailand, is the Indo-Pacific Nurse Shark, which can reach an impressive length of up to 3.5 metres.

They are nocturnal and feed on sea urchins, crayfish, crab and squid, which they sift into their mouths. During the day, divers might encounter them sleeping in caves, under large coral blocks or overhangs.

Nurse sharks have become rare in the last years in Thailand and are not often sighted. Best chances to meet one are around the Similans and north of it, on a diving safari over several days. 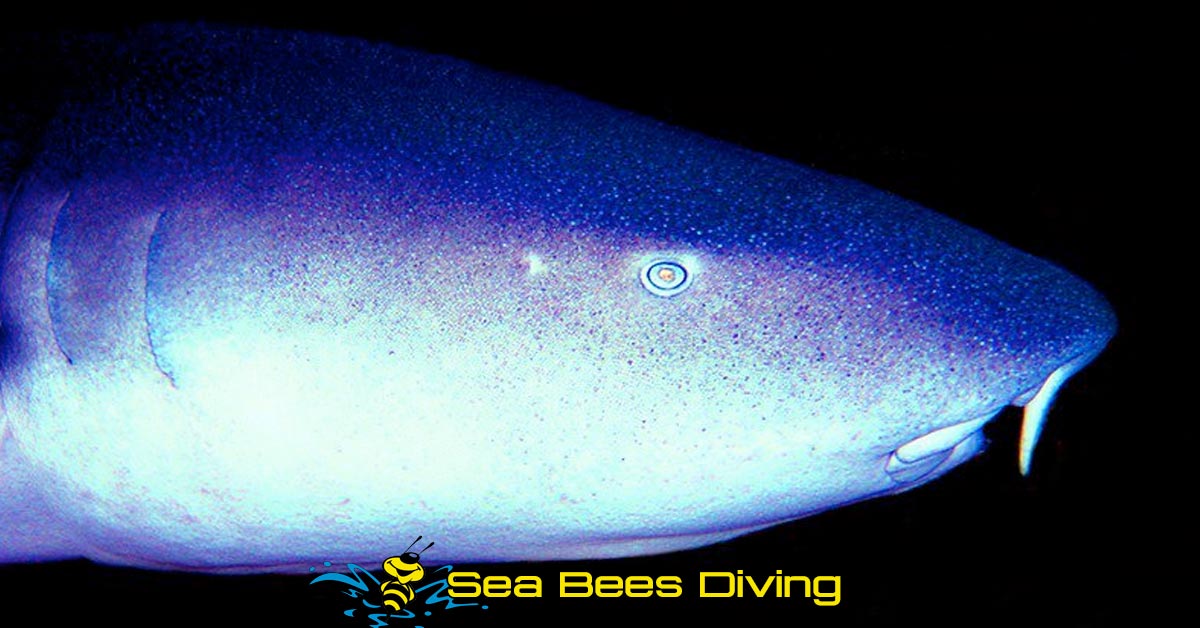 Last but not least, we want to present the only shark in our list that could potentially be dangerous for human beings – in most cases, these sharks do not represent a great risk.

Since 1958, there have been less than fifty Bull shark attacks reported. Bull sharks are a very special species because they live not only in the sea, but have also been sighting swimming up rivers!

Growing to over 3 metres and sporting a heftier silhouette, they are easily recognizable and impressive to look at. Knowing they can pose an element of danger makes an encounter with a Bull shark an unforgettable experience In Thailand, Bull shark sightings while diving are very rare, but with some luck they might be spotted along parts of the Gulf of Thailand, as well as Hin Daeng and Hin Muang. 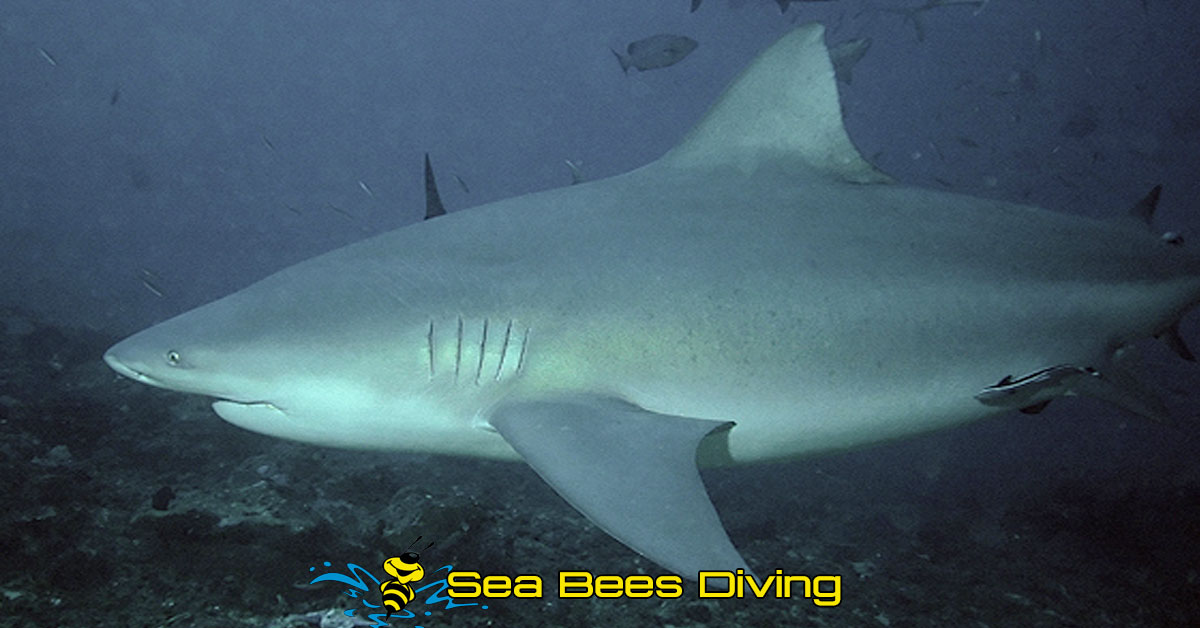 Danger from sharks in Thailand

As you’ve read, most of the shark species found in Thailand and close to the coast are harmless to humans. The world’s most dangerous shark, the white shark, does not exist in Thailand!

Of the more than 400 species of sharks worldwide, only 5 species are potentially dangerous to humans. Two of these species (bull shark and tiger shark) are found in Thailand, but sightings are extremely rare.

In Thailand, there has only been a single confirmed case of a shark attack in the last 500 years! Worldwide there are less than 100 confirmed shark “attacks” on humans per year. On the other hand, the number of sharks killed by humans is 80 to 100 million per year.

A very sad statistic and one of the reasons why the number of human encounters with sharks in Thailand has declined. However, divers and sharks can continue to look forward to some shark species that are sighted more or less regularly in Thailand. Would you like to find sharks with us?

Contact us now for more information about our offers!